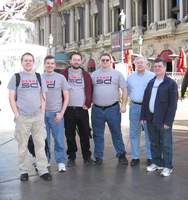 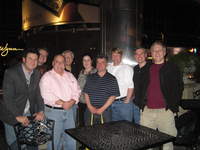 We apologize for being somewhat delayed in our report from CES 2010. This year, we were able to get all but one of the board members to attend our annual in-person meeting, along with two members of our advisory council. In the photo (left to right), you'll see Chris Petersen (COO), Robert Kulagowski (Lineup Support), Daniel Kristjansson (Director), Robert Eden (Director), Geoff Newbury (Director), and Kevin Odorczyk (Director). Cecil Watson (LinHES) and Mario Limoncello (MythBuntu) from our advisory council were also able to attend, but somehow escaped the group photo. Isaac Richards (Director) was unable to attend.

We had an extremely productive meeting with our TMS account manager and his team, and were even able to meet up with some of the TMS support team responsible for fixing the lineup issues that many of our members report.

Aside from this, we walked the CES floor doing our best to speak with many of the vendors who produce Linux-friendly media devices that benefit supported applications like MythTV (e.g. the guys at Silicon Dust), as well as systems with embedded Linux (there were a number of Linux-based home theater devices like the Boxee Box, and we would be happy to help these groups add more open source plugins to their devices).